We strive to offer quality tennis and academic programs run by professional and highly-qualified coaches. Our team of professional coaches is dedicated to making these programs into instructive and live-enriching experiences. They bring their vast experience and expertise to Weil and create a unique and engaging environment for each student. 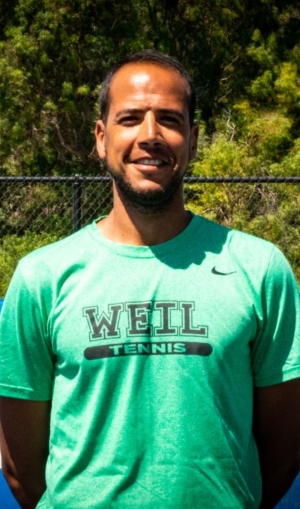 Head Coach Mo Badran is originally from Cairo, Egypt, where he was ranked Top 5 in the country as a junior player and won a Gold Medal for Egypt in the Arab Games.

In 1995, he received a scholarship to train at an academy in the US, where he trained with other internationally top ranked players.

He earned his Bachelor's Degree in Business & Logistics from the Arab Academy for Science & Technology in Cairo, where he began his coaching career, while in college.

In 1999, he began coaching some of Egypt's top juniors at the Heliopolis Club in Cairo, including Ahmed Ismail, whom he sent to Weil Academy in 2005.

Coach Mo was promoted to Weil Head Coach in 2010 and in 2014, he joined Mark Weil's College Placement Team.

Coach Mo can be reached at mohamed@weiltennis.com. 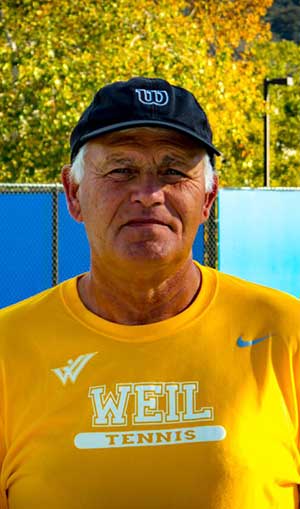 Head Coach Ogi Katsarov is originally from Bulgaria. He worked for the Bulgarian Fed Cup Tea, as an assistant coach from 1999-2003 and as a head coach in 1995, 1996 and 2004. Coach Ogi has worked with the likes of Magdalena Maleeva, three Top 150-250 WTA players, ten Bulgarian National Chamlions and a Semi-Finalist in the Orange Bowl.

He graduated from The Higher Institute of Physical Education, specializing in Tennis & Pedagogic Profile. As a tennis player, he participated in the National Team of Bulgaria, ranked fifth place in the Men's National Team and placed first in Tier 1 Doubles in national tournaments.

His coaching career began in 1980 in his home city of Plovdiv, where he also lectured from 1983-1989. He coached for the Locomotiv-Stad Tennis Club and in 1991, he became a coach for Bulgaria's National Women's Team.

He is married to Veselina Katsarova. Their son, Bozhidar Katsarov, was Top 20 ETA and went on to play for UC Berkeley.

Coach Ogi can be reached at ognyan55ka@hotmail.com. 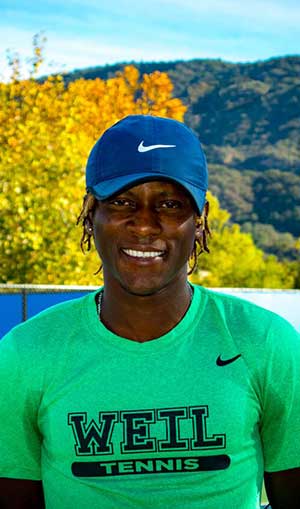 Head Coach Charly Irie joined the Weil Tennis Academy coaching staff in 2008 after graduating from Fresno State University with a Bachelor's Degree in Mass Communications & Journalism (Public Relations). He competed for the Fresno State Bulldogs Men's Tennis Team from 2004-2008 on a tennis scholarship, where he played in the top four of the lineup.

He is originally from Abidjan, Ivory Coast, where he began playing tennis at the age of ten. He achieved a junior career high ranking of #67 ITF and #1 Junior in Ivory Coast. He is also proud to have represented his country as a member of the Ivory Coast Men's Davis Cup team since 2003.

During his junior career, he had the privilege to compete in prestigious junior international tournaments such as Wimbledon, Eddie Herr and Orange Bowl. While a junior, he also compete against top ranked ATP players such as Richard Gasquet, Jo-Wilfried Tsonga, Rafa Nadal and Marcos Baghdatis. Coach Charly has won several junior championships around the world including an ITF Grade 2 in South Africa and was a finalist at the 14 & Under 2001 African Champs.

He has four brothers and two sisters and is married to Eszter Irie.

Coach Charly can be reached at iriecharles@yahoo.fr. 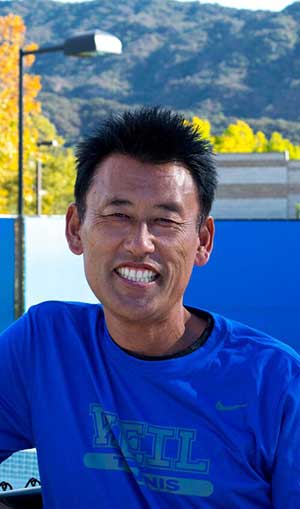 Head Coach Ozaki, originally from Tokyo, Japan, was ranked #3 in his section while a college student in Japan. He coached in Tokyo for six years and was the Director of Lavoy Pacific College (sports college) from 1990-1993. He also developed the BETA (Briscoe Eisendrath Tennis Academy) in Washington, where he served as Director for eight years. Before joining Weil Tennis Academy, he directed the Pacific Tennis Academy.

In addition to coaching, Coach Ozaki travels to Japan regularly to recruit students for a new Asian Training Program at Weil Tennis Academy.

Coach Ozaki can be reached at smash@takeshiozaki.com. 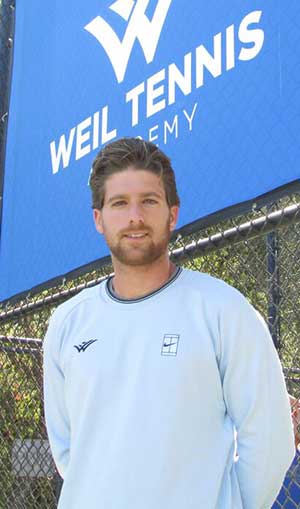 Coach Juanjo is originally from Cáceres, Spain, He studied Sports Science for five years at the University of Extremadura in Spain. He has his Spanish tennis coach certification from RFET (Spanish Tennis Federation) as well as his tennis fitness certification from ITPA (International Tennis Performance Association). He specializes in tennis training and tennis fitness training.

Coach Juanjo can be reached at jjclimentr@gmail.com.

Pedro is originally from Puerto Ordaz, Venezuela, where he was ranked in the top 10 in Venezuela from age twelve through sixteen. Pedro came to the U.S. in 2009 to study and play for Ventura College and had great success, winning the 2010 California State Community College Team Championships, as well as taking the state doubles title with his twin brother, Juan.

Pedro was then offered a full scholarship to play at Our Lady of the Lake University in San Antonio, Texas, where he majored in International Business and helped his team achieve an NCAA Top 20 NAIA team ranking for the first time in the school's history. After graduating from OLLU, Pedro worked as an assistant coach at OLLU for one year before joining the Weil coaching staff in 2014.

Coach Pedro can be reached at pedro_89@hotmail.com. 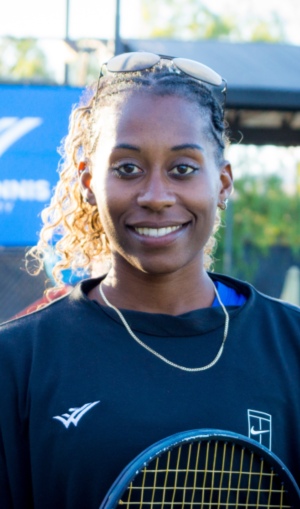 Coach Dominique is originally from Nottingham, England. She became a volunteer assistant coach at the age of fifteen, for numerous tennis clubs in the Nottinghamshire region. She went on to complete both her Level 1 and Level 2 coaching qualifications from the LTA (Lawn Tennis Association), at the ages of sixteen and eighteen respectively. From 2009-2011, Dominique went on to work at the Nottingham Tennis Center as an assistant coach for ages 2-50+.

She started playing tennis at the age of fourteen and quickly excelled to a higher level. Additionally, she joined after-school clinics, where she was picked up by high performance coaches who saw her potential, which led to her invitation to train at the Nottingham, Tennis Center's High Performance Academy. Following this, she received a full scholarship to train and study at Morehead State University (Division I) in Kentucky in the Spring of 2012. She earned her Bachelor's Degree from MSU in Exercise Science and worked as a personal trainer for various age groups and levels.

In 2015 and 2014, Dominique spent her summers at Weil as an assistant coach and residential counselor.

Coach Dominique can be reached at dominique.chante10@gmail.com. 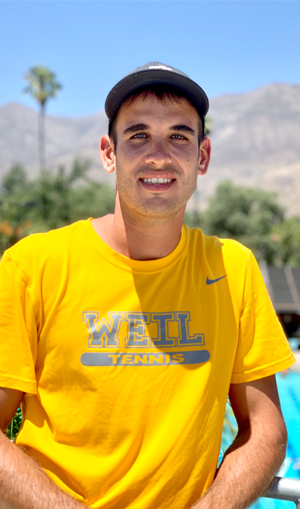 Pedro Rodrigues is originally from Leiria, Portugal, where he was ranked Top 20 as a junior player.

Pedro came to the U.S. in 2010 when he was offered a full scholarship to play at Cumberland University in Lebanon, Tennessee. Pedro received his Bachelor's Degree in Management & Accounting from CU in May 2014. During his four years of playing for CU, he played top 3 in singles and #1 in doubles. He helped his team reach Nationals three consecutive seasons, and helped them reach a #6 NAIA team ranking, the highest in the school's history. Pedro was ranked No. 30 in the nation in singles, 10th in doubles, and earned 2nd Team All-American as a junior. After completing his degree, Pedro worked as an assistant coach for two years at CU, while completing his Master's Degree in Business Administration, before joining the Weil coaching staff in June 2016. He has his coaching certificate from the Portuguese Tennis Federation.

Coach Pedro can be reached at pedro91rodrigues@gmail.com. 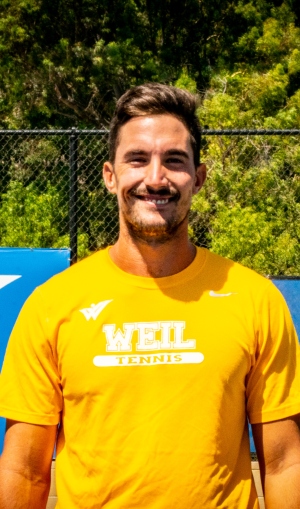 Julio Pulido is originally from Caceres, Spain where he grew up playing junior tennis and was ranked as high as #5 in Spain under 16s. He received his coaching certification from the Spanish Tennis Federation and Spanish Paddle Federation at the age of 16. He worked at Escuela ACE in Spain as a tennis and paddle coach. He also directed summer camps and worked at Sportime Amagansett for 4 years (3 as Tennis Camp Director). He was also a private coach for several juniors in New York and spent time as a Master Pro at the John McEnroe Tennis Academy in NY.

In his competitive career, he spent 2 years at Oklahoma Christian University where he helped the program win the 2012 NAIA National Championships. After the OCU tennis program was cancelled, he transferred to the New York Institute of Technology. At NYIT, he played in the No. 1 position in singles and doubles. In his junior and senior years, he won two East Coast Conference Championships (2014 & 2015) and was named East Coast Conference First Team and Player of the Year in both years. Julio graduated from NYIT with a Bachelor's degree in Finance in 2015.

Julio continued his graduate studies at Baylor University and was one of the assistant coaches for the men’s team under legendary coach, Matt Knoll, from 2016-2018. The team was ranked as high as #3 NCAA Division 1. In 2018, he graduated from Baylor with a Master's in Sports Science.

Julio joined Weil Tennis Academy in 2018 and will assist in both the tennis and fitness programs.

He can be reached at jpulido@weiltennis.com. 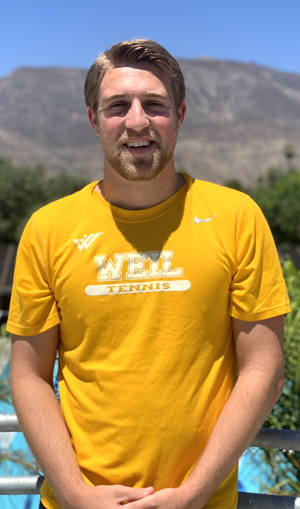 Mitch Weil was born and raised in Ojai, California. Growing up with Weil Tennis Academy as a part of his life, he quickly developed a love for, and a deep understanding of, the game of tennis. He attended Gonzaga University, located in Spokane, Washington, where he majored in Classical Civilizations.

Mitch joined Weil Academy as a part-time assistant coach/summer activities director in 2016. After 4 summers of continuing to develop his coaching techniques, he’s very excited to join the Weil staff for the entire school year.

He wants to put into practice the same incredibly hard work he’s seen his parents, Mark and Jane Weil, employ over the last 22 years. This hard work will be shown coaching on the court, on residential duty in the dorms, assisting with college placement, and even teaching in the classroom.

Coach Mitch can be reached at mweil@weiltennis.com. 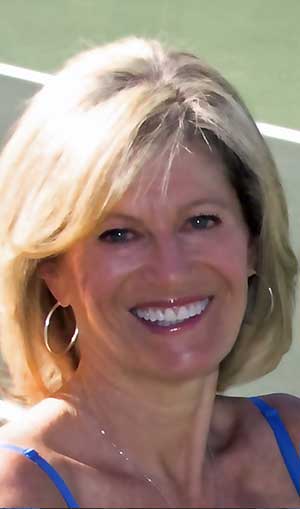 Stacy Margolin Potter, M.A., C.E.D.S., was a professional tennis player from 1977-1987. With victories over many Top 10 players, she reached a world ranking of No. 18. While attending USC, she won the National Collegiate Singles Title as a freshman. She was also a member of the USC team which won the NCAA title the following year, playing the #1 singles position. Coming off the tour, Stacy coached the women's tennis team at Pomona College. She then completed her studies at UCLA and received her Master's Degree in Clinical Psychology from Pepperdine University. Stacy worked at Rader Institute for 12 years as an Eating Disorders Counselor and is now a Certified Health Coach.

On the physical side, Stacy and her husband, Ian, operate "Trails By Potter," a hiking, climbing and biking tour service throughout the Ojai Valley and Ventura for the past fifteen years. www.hikingojai.com

Stacy continues to be involved in the tennis world through occasional coaching and charities. She enjoys yoga, running and living the Ojai life for eighteen years.

Stacy can be reached at stacy@stacypotterhealthcoach.com. 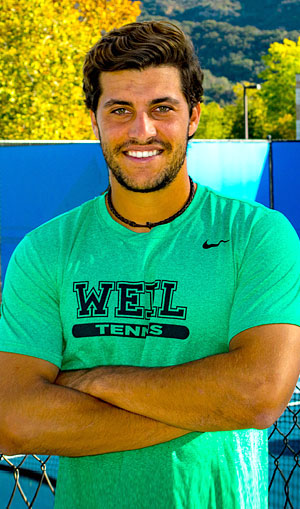 Jose is originally from Cadiz, Spain. He trained and competed in Spain from the age of nine, until he was offered an academic and athletic scholarship to play college tennis for New Mexico State University. Jose transferred to Cumberland University in Tennessee to play and finish his studies in Business Management and Accounting. Jose joined Weil Tennis Academy in 2017 and commuted to California State University Channel Islands for two years to continue expanding his skill set and adding to our community. He recently finished a Master in Business Administration.

Coach Jose an be reached at jaortegav@outlook.com.